Hello, my name is ZOLO, dreams about Wasp are usually associated with dreaming about A small bird turning into a wasp, do you think it is true?

A small bird turning into a wasp

I picked up an injured tiny little bird and it turned into a huge wasp and it laid an egg in my hand.

An injured or wounded bird in dreams represents a tumultuous period ahead of you. Its transformation into a huge wasp refers to a damaging gossip. Combined, these two dream symbols paint a negative turn of events that would stem from your innate kindness. You would be generous enough to help out a friend, unfortunately this would be taken the wrong way and used against you to make you seem like the villain. So when the wasp laid an egg in your hand, it means you would be overcome by fury because of the betrayal of your trusted friend.

Stung by a wasp

Being bitten or stung by a wasp in the context of a dream vision often means you are soon to be separated from or may soon part ways with someone you currently spend a lot of time with and enjoy the company of in reality. Some interpretations of this symbol suggest this split could be due to differences of opinion or some sort of fight, but others indicate this could simply be due to physical distance or a general growing apart as your lives take different paths.

Attacked by wasps together with son

I dreamed I was at edge of woods near my house with my grown son. We were picking plants. Unexpectedly my son almost touched an active wasp nest. He jumped away. There were 2 wasp nests together with wasps. As we were running back to the house, I looked behind and saw them flying following me. I shook the plants at them, a shower of water went in the air. I made it home, my son was not with me, he chose to stay back where the wasps were.

Being with your son in the woods represents fertility and rejuvenation, but it can also symbolize the subconscious and concerns taking up space in your mind. In this context, picking plants could mean you and your son will be discussing or exploring these issues together. Depending on how you handle it, it can be therapeutic or confrontational. The wasps convey both positive and negative meanings. On one hand, you are capable of mediating an issue and you know how to manage your emotions which are key components to your other successes. On the other hand, wasps can also indicate misfortune and negative feelings. This just means that if either of you let your emotions drive your decisions, you could both end up stewing in anger and create a rift in your relationship. 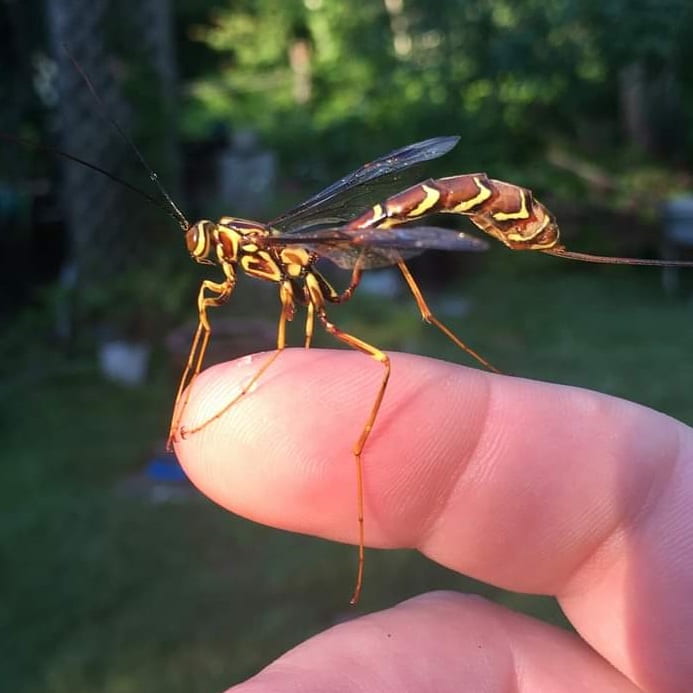 A wasp in general

The image of a wasp in a dream vision, as a solitary symbol, is often associated with news, chatter and communication. This is sometimes a good sign, as it could represent being on the receiving end of happy or positive news. However, this same portent is also associated with gossip, misunderstandings and rumors spread by rivals. This same symbol can also represent a member of your group of friends who has trouble expressing themselves or getting their true feelings across, leading to passive-aggressive or out-right hostile behavior that makes them even more difficult to get close to.

Wasps coming out of ears

Female. I dreamed I was with my sisters and children, when wasps enclosed in pink transparent sacks (cocoons) started coming out of my ears. It didn't hurt, but there was pressure as they exited, and then relief. Only one of my sisters made any comment about it, she just said "These are wasps! What the hell? That's so weird".

Wasps are generally a contradictory symbol associated both with good news and harmful gossip. Envisioning wasps forming in cocoons and flying out of your ear may reveal that you would be the source of one of these outcomes. This means you could use your influence to share some positive, uplifting information about others, or you could spread malicious rumors intended to hurt and degrade others. The presence of your family in the dream could suggest the scope of these circumstances, perhaps involving your extended family or a close group of friends. You may want to be careful if you have already shared some information with those around you.

Being stung by a swarm of wasps

I'm in my house living room with my relatives. Was peaceful until a wasp entered and a swarm of wasps or bees suddenly appeared. My grandad and dad tried to use me for cover but I ducked and covered myself. I got stung at the shoulder area near to my back and neck.

Seeing a swarm of wasps in dreams often reveals the dreamer's admirable work ethic and integrity. Although it can also mean getting involved in a tricky situation at work or at home. You could be tasked to do something that is against your values and principles. In the context of your dream, the latter interpretation may be more appropriate since you ended up getting stung by a wasp. The symbol of getting stung by a wasp usually points to a parting of ways. Perhaps friends, colleagues or even family members are pressuring you to do something questionable and this could force you to stand your ground at the risk of gaining the ire of your loved ones.

Frightened by a wasp

Being frightened or shocked by the sudden appearance of a wasp in your dream vision may be a subconscious message to be extremely wary of where you are or whom you are with in reality. This symbol suggests you may be in immediate danger of an accident, serious injury or harm. This danger is not limited only to your physical being though. Emotional or psychological pain can also be associated with this dream symbol.

Crushing a wasp during the course of a dream vision, whether you did so on accident or on purpose, symbolically represents the sudden appearance of vile rumors going on behind your back. Some so-called friends may actually be using your secrets and private opinions against you in a very public forum. Destroying or removing a wasp nest has a similar connotation, indicating an unpleasant separation from someone you love or care about. Boyfriends and girlfriends may break up, while married couples may have a disagreement or fight.

A wasp flying by

Seeing a wasp fly by you at some point during a dream vision represents positive changes or circumstances coming about in reality. You may soon receive some good news or learn of some improvement taking place in the near future. You would feel positive emotions during this period, including relief, excitement, joy and satisfaction. This prediction holds true whether the wasp was flying past you or if it was simply crawling across a surface in front of you.

The image of a large nest of wasps in the dream world, especially if it was particularly close to you, could predict great unhappiness, frustration or disappointment in the upcoming days and weeks. This symbol often represents the idea that someone or something would let you down or cause you internal turmoil. If you accidently came across or disturbed a wasp nest during the course of a vision, it is possible your work environment is not ideal for advancing either your career or personal goals. Specifically, this image implies supervisors, co-workers and even underlings may be interfering with your work or otherwise trying to impede your progress.

A wasp circling you

A wasp that circles you, in the context of a dream, is often interpreted as a sign of minor conflict in reality. You may soon butt heads with someone who rubs you the wrong way. However, this negative interaction is unlikely to have deep or lasting negative influence on either of your lives. You would be able to get over it quickly and move on to bigger and better things, possibly faster than you initially anticipated.

A swarm of wasps

The image of a swarm of wasps coming towards you and enveloping you is actually a fairly positive symbol, despite the fact that it seems a bit scary. This symbol suggests your superiors or bosses are happy with your performance at work, particularly your ability to be on time and maintain high moral standards. While you may suspect or know of jealous rivals attempting to get in your way, it is likely you would not be hindered by their actions. You could receive a commendation, special recognition or a promotion.

Another interpretation of this same symbol suggests you may soon become involved in a difficult, questionable or even illegal activity at your place of work. Your behavior, words or actions during this period could lead to your dismissal or termination, possibly leaving you in dire straights for some time after the fact. Furthermore, there is a chance this situation would become common knowledge outside the workplace, making it necessary to find a new city and start a new life without this event hanging over you.

A wasp stinging someone

In the context of a dream vision, seeing another individual stung by a wasp is often interpreted as a sign that you would soon be successful in your dealings with ruthless rivals or cunning competitors. This symbol implies that your personal sixth sense for sniffing out trouble or potentially dangerous situations would allow you to avoid pitfalls and get ahead of those trying their best to make your life difficult.

Hearing the buzz of a wasp or a whole nest of them may predict bad luck in current or future endeavors. You may need to exercise caution or exert more effort to overcome this obstacle. Another interpretation of this same symbol suggests someone close to you may soon become seriously ill, suffer a grave injury or even pass away. As this individual is likely a family member, close friend or co-worker, their passing would have a deep negative impact on you for years to come.

Wasps circling and relation to siblings

I dreamed of wasps, 3 or 4 circling me, I was able to knock the closest one to the ground. At the time, my siblings and I were not on good terms. I feel not close to them, and feel the dream was about them.

This vision of wasps buzzing around you represents the dark period you have entered in regards to your relationship with your siblings. You may have been expecting that this situation would resolve itself quickly and things would return to normal, but swatting the insects and knocking them to the ground indicates that things are probably going to get even worse, most likely due to your poking and prodding. For now, It may be best to let the storm calm down before pressing forward.

A wasp on an animal's nose

Watching as a wasp lands on the nose of an animal and stings it is a sign of possible betrayal or insincerity on the part of someone you know. This symbol is often interpreted to mean someone has made themselves particularly close or invaluable to you over the course of a few weeks or months in order to take advantage of your unsuspecting, kind and generous nature. If the animal from your vision attempted to run away and hide from the wasp in a pool of water, it could mean these ruthless individuals would put in much time and effort to get what they want from you. You are unlikely to come out unscathed in this situation.