Hello, my name is ZOLO, dreams about Piglet are usually associated with dreaming about Bathing a piglet, do you think it is true?

I dreamed I was bathing a piglet. Then I said where is her mother.

Piglets in dreams are often interpreted as a symbol of potential wealth or prosperity. As such, bathing this small pig could predict making modest profits from an income source which you have been working on for some time. Additionally, it may reveal that small but consistent effort could lead to greater results later on. However, wondering about the mother pig could indicate wanting to wait for the easy road to prosperity, for example, winning the lottery or receiving an inheritance. Because the mother pig did not make an appearance in this vision, this symbol warns that hoping for blessings without hard work could lead to ruin or waste. 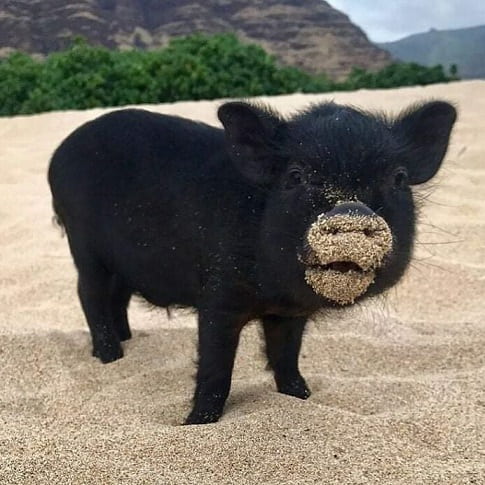 I had a dream that I was at a friends lake house, everyone was outside on the boat, but I decided to go inside to use my laptop. When I went to plug in my laptop without looking I felt something furry and small. I looked, thinking it was my cat, but realized it was an infant piglet with his little foot stuck in the broken wood floor board. I saved him. And then held in my arms for a little while. Then I woke up.

The image of a piglet in your dream could indicate your recent communication, most likely online (based on the image of the laptop you were using in this dream) with a friendly and sincere person, who was impressed by your personality and the way you presented yourself. The notion of the piglet's leg being stuck in the floor speaks of the lasting impression you might have left with this person. You also might have genuine interest in continuing this communication get to know this person better.

Caring for a sick piglet

I had a dream that there was a bag full of a lot of piglets and one of them I had to pick out to care for and the one that was mine ended up being the one in the worst condition. It was almost dying and disgusting, lying in green goo. I was more bit of taking care of this piglet because of religious reasons more than anything that I grew up in. I found it very gross but the one tiny little chance I gave to the pig, it quickly came to life began to talk, became happy and I loved it, even turned human and dressed almost beautiful and it called me "mama", just like I told it to call me.

This dream is filled with a number of opposing symbols, making it difficult to come to a concise interpretation. It starts on a negative note, as a sickly, dying baby pig represents experiencing financial hardship. This means you may be struggling at the moment or that, while you are able to cover your basics, you may be falling behind in saving for your future or investing in yourself. Caring for this piglet out of obligation indicates you may be unwillingly doing what you have to do because other people (your parents, supervisors, etc.) expect it of you. However, your choice of this piglet can also indicate becoming satisfied with your life, either because you have risen higher or because you have found a better way to manage what you currently have. In either case, seeing the pig's health improve and then watching it transform into a human predicts an upcoming situation where you must rely on the help and kindness of those in higher places, either to get out of financial trouble or to rise to a better position in life.