Hello, my name is ZOLO, dreams about Gorilla are usually associated with dreaming about A gorilla squeezing your head, do you think it is true?

A gorilla squeezing your head

An abnormally huge gorilla was squeezing my head with his hands and before it got to me I knew it was going to squeeze my head and there was a woman I never saw before in the room with me and I was asking for her help but then I woke up.

Having a large gorilla attack you during a dream may reflect the annoying, overbearing or highly sexually-charged behavior of someone you have recently met in your waking life, whether you wanted it to happen or not. This is particularly relevant when you are referring to the gorilla animal as "him". In a sense, the control they exert over you is manifested in the form of this large, formidable animal. The squeezing of your head may represent some of the stress or headache caused by being unable to express your own will or follow your path. Perhaps you feel that decisions are being made for you, or that you are being pressured to behave or think in a certain way, so it would be nice to resolve things before they get out of control.

Chased by a gorilla

I'm in the dark warehouse being chased by a giant gorilla and I have to find a key to get out, but the floor keeps collapsing out from under me.

The warehouse in your dream could represent your repressed thoughts and emotions. In particular, the giant gorilla chasing you refers to your primal instincts and sexual urges. You could be suppressing your desires for propriety's sake or out of fear of being judged and it is making your restless. The collapsing floor could mean that you are having troubles managing your emotions and needs to a point when you would eventually give in or lose control over your actions.

I dreamt that I was sitting up on a tree watching a group of gorillas fighting below me. They did not know I was there. It was in a forest or jungle type setting.

Being in a jungle means you are exploring your subconscious and the other elements you find in this jungle represent various layers or aspects of your mind. Since you were sitting up on the tree in your vision, it means you are feeling detached and unable to relate to the workings of your own mind. Specifically, your detachment is related to the gorillas which represent sexual instinct and desires. For females, these gorillas represent males fighting for your attention yet you do not seem remotely interested in their posturing. You would rather spend time alone than deal with their toxic masculinity. 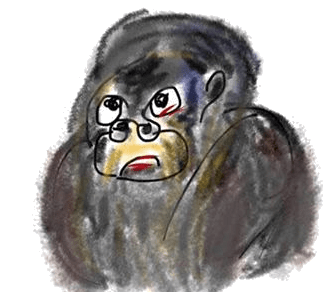 A gorilla in general

To dream of a gorilla in general when you are visiting a zoo, or those you may have seen in the Planet of Apes movies - strong, big, and hairy primates, is an ambivalent symbol representing suppressed or forbidden male sexual instinct in the waking life. Therefore, for females it is tied to a man whom she is trying to resist or avoid thus the gorilla features highlighted. For males, it could be an indication of some controlling female personality, like an imposing mother figure, wife or a nuisance mistress who exerts a lot of unnecessary control over them.

Additionally, seeing a gorilla in a dream for females does not entirely connote a negative meaning, because she could be trying to escape the strong sexuality or dominance from a male she was running away from, as a way or means of possibly creating and nurturing a family with him in the future in her waking life. The showcasing of outstanding qualities or strong features the gorilla possessed in the dream was presented to win her back later.

Being followed by a gorilla down the steps

I dreamed that I was shopping with my daughter, I found a shirt I liked but it was too small. As I was leaving, I noticed I had a shirt from the store tucked under my arm. I called to the salesgirl to give it to her, as I was climbing back up around 50 concrete steps to her, there was a black gorilla after me. I was running up the steps with the shirt, as I got near the top I threw her the shirt, the gorilla was right behind me, but didn't bother me, just kept going. I felt somewhat scare of gorilla.

Both the dream symbols of shopping and climbing the steps reveal your ambitious nature. Dream workers associate shopping with progression and developments, while the shirt that was too small or ill-fitting alludes to change. You are getting rid of old habits that may be holding you back. However, returning the shirt could indicate a setback. Perhaps you are not prepared to embrace the coming change and are tempted to stay in your comfort zone. Finally, the black gorilla for female dreamers is a metaphor for a masculine personality whom you are trying to avoid. The fact that the gorilla did not bother you means your suspicions may be unfounded or fueled by your personal issues.

A gorilla and a windshield cracking

I dreamed I was outside with others, somehow there was a large gorilla nearby. He didn't bother me, but scared me, as I moved away from it. Also, I dreamed I was in car, side window was cracked, then windshield started cracking across, but I could still see, wasn't directly in my vision line.

A gorilla generally represents power or sex-related situations. You are likely very attracted to or want to impress someone in your life, yet this person does not seem to be interested in you. It may be because you are intimidated by his presence, so your interactions are always awkward and uncomfortable. In the second dream, the cracked windshield and side window or glass represent your skewed or distorted view of reality. You are either overestimating your own abilities or underestimating your capacity to succeed. As a result, you are going to experience tremendous stress and difficulty in your quest to achieving your goals. If this is connected to the first dream, then you are actually prone to self-sabotage. Instead of having faith in yourself, you are the first one to bring yourself down. Bosses and authority figures would see your crippling insecurity and dismiss you as someone who is not ambitious enough to rise in your chosen industry.

A gorilla tying a lion

A gorilla was tying a lion with a rope.

A gorilla can represent a difficult personal struggle, sometimes involving false friends or business partners while seeing a lion in your dreams could indicate that you're being aided or directed by forces beyond your comprehension. Seeing a gorilla tie a rope around a lion's neck, in this case, suggests that the lion is being tamed, meaning you may have an opportunity to take control of the situation for your benefit and come out victorious.