Hello, my name is ZOLO, dreams about Waterfall are usually associated with dreaming about Admiring the view of a waterfall, do you think it is true? 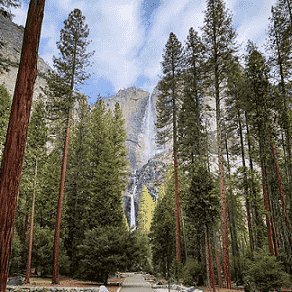 Admiring the view of a waterfall

Admiring the view of a beautiful waterfall and its surrounding foliage is often connected to the dreamer's internal need to be curious as well as their ability to appreciate the splendor of nature. This sense of wonder and awe in the face of new and exciting ideas may give you an added edge in solving the problems presented to you, particularly due to your desire and commitment to learn more.

Causing a waterfall to dry up

I saw a waterfall, in which people were having a good time standing under. When I went to stand under it... it dried up.

Having a dream of looking at a waterfall could mean you could soon meet another person who would be important in your waking life and who even may leave you shaken to the core. The notion of the waterfall drying up when you stood under it could mean that while you can see other people around you experiencing major changes in their lives, you are being left out of meaningful things taking place in your own life. It is as if the deeper emotional experiences in life represented by the waterfall are being denied to you. That could either be due to some aspects of your personality or to an overall perception you tend to maintain.

Me my friends and my boyfriend were in a kind of place and I saw a small waterfall and I went and watched it fascinatingly and on the way to returning I again saw a waterfall which was huge and more beautiful and I had to walk uphill. There I asked some kids the way to go there and they showed us. I turned to my boyfriend and asked him to go along with me but he said he doesn't want to. I got angry and asked him my things, he was about to give in and then I got more furious and discussed with him why he doesn't want.

Dreaming about observing a waterfall has negative connotations. The turbulent water rushing down signifies problems and calamities which you would have to face in your waking life. The notion that you saw an even bigger waterfall when you walked uphill, points that these problems could continue taking place for a prolonged period of time. This negativity is further reinforced by you getting into a fight with your boyfriend. The difficulties that you face could result in creating discord between you and him, possibly involving other people around.

Bathing in a waterfall

Wading and bathing in the waters of a waterfall often reflects the dreamers' past and present ability to overcome the stereotypes and preconceived notions that have followed them throughout their lives. The dreamer has probably learned a lot by overcoming the innate and sometimes discriminatory beliefs of those around them. This has probably led to a life unburdened by the critique and gossip of others, as their opinions are likely not relevant or important to how the dreamer thinks or feels about himself or herself.

Standing on top of a waterfall

Standing on the precipice of a waterfall and looking over the edge as the waters plummet below is a fairly positive symbol to perceive in a dream vision. It often reveals the dreamers innate ability to manage the issues that pop up in their life, avoid conflict, and overcome the roadblocks that appear in their path. In many cases, this can be done with seemingly little effort or active thought on the part of the dreamer.

Falling from a waterfall

Traveling down a fast current and plunging over the edge of a waterfall is a symbol that portends love in reality. In particular, this sign suggests you have fallen head over heals for someone from wake life, possibly a co-worker, friend or someone else you see on a regular basis. This vision does not predict the beginning of a new relationship directly, rather, it reveals the happiness and pleasure the emotions of falling in love would add to your life.

Staring at a waterfall

Staring or being entranced by the image of a waterfall is often interpreted as a negative symbol in the dream realm. It predicts shock and horror, particularly from some unexpected source or unconsidered possibility. This shock would strike you very suddenly and hard, leaving you with a distinct feeling of loss and an inability to determine what to do in the wake of this misfortune.

Being in a waterfall

Being inside or under the falling water of a waterfall is often predictive of some upcoming threat or unexpected danger. You would probably not see this looming trouble brewing, leaving you unprepared to physically, mentally or emotionally deal with the event or its aftermath. In most cases, the strength, size and force of the waterfall's current is directly related to the amount of trouble or danger you would soon find yourself in.

Washing by a waterfall

Washing your face or arms off in the pools of water below a waterfall is often interpreted as the manifestation of love and admiration being shown towards you by someone in reality. This person who feels kindly toward you is likely someone who is or would be important to you future, such as a longtime friend or future life partner.

A waterfall in general

Dreaming of a waterfall during the course of a dream vision, whether you can feel the splash of its water or are only observing it from a distance, means you are the type of person who can easily handle your duties while also maintaining a healthy social life. In a sense, this means you are good at striking a balance between your work and leisure time in reality. This also suggests that you can work hard and put in a lot of effort for important tasks without being overwhelmed or feeling like you are sacrificing too much of your free time.

Another possible interpretation for this same image refers to an upcoming or planned social event in the near future. This party, concert, game or other entertainment event would give you the opportunity to hang out with interesting, enjoyable individuals and make happy memories. You would look back and remember this time period fondly as well. This particular meaning is often most applicable around the holidays or other major celebrations, such as weddings, birthdays and anniversaries.

Drinking water from a waterfall

Drinking or indulging in the cool, clean water of a waterfall often predicts material benefits or rewards coming about in reality, particularly those that would greatly improve or alleviate your current situation. In many cases, your wealth or investments would rapidly increase in value over the coming months, or you would be rewarded or reimbursed for some past action, project, work or effort.

A sound of a waterfall

Hearing a sound like that of a waterfall but not actually being about to see or locate the source suggests danger is lurking around the corners of your life. You may be tiptoeing towards a serious situation that could have very negative consequences. However, you may be able to avoid most if not all of the trouble if you go canny and avoid taking unnecessary risks.

Envisioning a waterfall that you perceive as particularly small or unimpressive may reveal some points of dissatisfaction or annoyance with your current romantic partner. Things may not be progressing at the rate you would like, or maybe the two of you seem to be moving in opposite directions and growing apart. If you felt that you were standing below the fall or recognized the sensation of the water rushing over you, it is possible you are leaning towards breaking up with this individual and trying to move on. Soaking or wading in the waters that pool below the falls could predict a long, drawn-out conversation with this man or woman that would leave you feeling drained and unable to muster any motivation or desire to save the relationship.

Hiding behind a waterfall

Using the falling water of a waterfall as a curtain to hide behind may reveal your shy or hesitant character. You may be reticent to get to know some new individuals in your social circle or work group, leading to some misunderstanding amongst the others involved. Those you are too nervous to get to know may feel you are snubbing them or believe that you think you are too good to hang out with them. This could lead to some difficulties networking and finding beneficial business partners or interesting people to spend your free time with.

A waterfall with dirty water

The image of a waterfall with dirty, impure water falling over its edge is often interpreted as a negative sign in the dream universe. It often predicts trouble and chaos in reality, causing much hardship for your day to day existence, for example, ruining plans you have already set into motion or your past achievements being destroyed. If not addressed in a timely manner or cleaned up quickly, the effects could be absolutely disastrous.

Calmly floating on a waterfall

I had a dream about a waterfall. It was huge, curved around. I was floating in the water at the top of it. The water at the top was very calm, like a pool or a pond. I could see over the edge, but couldn't see the bottom of the fall. The water continued to fall over the edge as it should, but I just floated there, never going over the edge. I felt calm, relaxed like I somehow knew I was safe and could not go over the edge. There was a couple of other people there with me. Close friends or family, but I don't remember any faces or who they were. Just floated there, smiling and chatting.

Floating and swimming in a large body of water, such as a pool or pond, predicts having new and exciting experiences. The image of the waterfall suggests that not all of these experiences are to be pleasant ones, as the nature of trying new things usually implies. Therefore, this scene seems to point to a period of growth in your life. The calm water you float in, however, indicates pleasure and being content in the future, so the outcome of this time is likely to be beneficial for your life. The bottomless oblivion you see at the end represents hard times and impending disaster. However, because you remained up top and felt calm and relaxed, this means being able to prevent or avoid these troubles.

Being thirsty looking at a waterfall

Seeing a waterfall in your dream vision and becoming thirsty at the sight of it may reveal lucrative or promising opportunities in your vicinity. However, you may not currently be utilizing these chances or even know that they are there, especially if your thirst seemed unsustainable in the vision. Your lack of effort to tap these resources and make them profitable could cost you in the long run, either in wealth lost or having to shell out to take advantage of what was once free.