Hello, my name is ZOLO, dreams about Mask are usually associated with dreaming about A car with masked people inside, do you think it is true?

A car with masked people inside

I am standing on the side of a road in the country. A large Cadillac pulls over, the driver has a complete face mask, the passengers all have burlap sacks over their heads. The car is pulling an open trailer with three rows of humans, 9 total. All have burlap masks on. I decline the ride, the masked driver leaves after another car comes in view.

The people you saw in your dream with burlap sack covering their heads are the people who are drowning in responsibilities and just trying to make ends meet. You found yourself by the side of the road because you want to avoid being trapped by the rat race. You could find yourself in between jobs soon or actively looking for a new opportunity that would suit the lifestyle you want. So, declining to ride in the van reveals your decision to go the alternative or non-traditional career path without the set hours, demanding bosses and the cubicles that would slowly suck the life out of you.

Wearing a mask during a dream, whether it is a Venetian mask that only covers the eyes or a full face-covering mask, may reveal upcoming challenges when attempting to help or aid your significant other in reality. Even though your intentions may be pure and without malice, your partner could interpret your actions in a different light. This could lead to them keeping some emotional distance from you for a short while.

The wearing of a mask during the course of a dream vision may also suggest that you have some concerns about how others perceive you outwardly in reality. If you imagined someone else trying to put the mask on you, it could be interpreted as a sign that others are attempting to adjust or influence your behavior in a way that pleases them or suits their own personal goals.

A facial beauty mask for women

A facial mask, such as a sheet mask or clay mask, takes on special meaning for women. It suggests that you may be blaming yourself for more than your fair share of the reason a recent sexual encounter or relationship failed. While you may feel that you were being unreasonable, it is more than likely that your partner shares half the blame as well.

Your lover wearing a mask

Envisioning your lover or significant other wearing a mask during the course of your dream vision may reveal some insincerity or untruthful behavior on their part. If you were to learn the truth about their behavior or discover what they have been hiding, it is very likely that you would part ways permanently, causing you great disappointment and sadness. 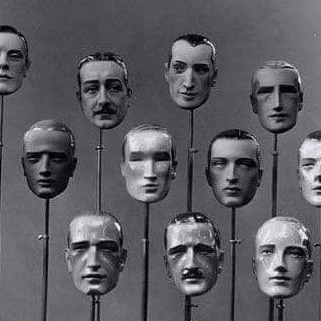 The symbol of others wearing masks in a dream vision, such as part of a costume or masquerade party, may shed light on your tendency to react badly toward those who are not authentic or honest. Those who put on airs or pretend to be different than they really are are likely frustrate and confuse you. The difficulty in understanding the gap between what they say and how they behave would be too much to ignore, causing you to avoid or scorn them.

Looking closely at a mask

Closely inspecting a mask during a dream, such as one in a display case at a museum, reveals that a current project or endeavor could suffer complications or setbacks. The source of your troubles is likely to be someone else rather than yourself. This individual may be someone already involved and knowledgeable about your ideas, but it is also possible that they are completely unrelated to what you are trying to accomplish.

Scared of someone wearing a mask

There is someone (a man) standing at the end of my bed with a mask on, they are trying to kill me. I then wake up.

To envision yourself being a victim of a murder in a dream could be a warning to be very careful in order not to fall into the traps set for you by your enemies or people who dislike you. This dream is also telling you to be watchful of your own actions or behavior that can ruin your image or reputation. A masked man symbolizes envy and pretense coming from someone close to you (as the notion of this man standing close to your bed implies).

Wearing a mask for young women

For young women, wearing a mask is often associated with deceit and lies. In this case, she would attempt to trick or deceive someone who has only acted as a friend and ally towards her. This could lead to major relationship issues if this individual learns of how they were treated.

A girl hiding from someone wearing a mask

Paper mache full headed mask. A girl hiding under floor boards from the one who wears the mask. Shallow water above the floorboards, but girl hiding isn't being flooded.

In the dream world masks represent hidden jealousy or envy. The girl trying to hide from the masked person represents your own subconscious self trying to hide secrets from those around you. Perhaps you are going through a difficult period in your life and are probably aware of those around you who may be resentful of your happiness. You could be suspicious that these people are simply waiting for you to make a mistake and therefore are trying to pry open your secrets. This negativity is further reinforced by the presence of shallow water. Since shallow water portends obstacles, make sure that you keep yourself alert and try to find a way out of these problems by being more assertive.

Taking a mask off for women

For women and those who identify as female, taking off a mask during the course of a dream, such as after a party or an event, can be interpreted as a sign that her attempts to impress and seduce others with her appearance would fall flat or backfire completely. If you see this sign in your dream, you should consider it as a message from your subconscious to be less superficial and more authentic in your appearance and behavior.

Throwing a mask away

Throwing a mask onto the ground or into the trash may act as the manifestation of your desire to change things up in your sexual encounters. Perhaps you are a bit bored doing the same thing over and over again with the same person. You may even desire to enter into a new affair, even if you are in a committed relationship. However, this vision also warns that you should not rush to hasty, irreversible decisions.

A vision including the symbol of strange, oddly decorated masks could be interpreted as a sign that you would soon have to deal with individuals who are attempting to control or use you. They would try to accomplish their own selfish goals by telling you lies, appealing to your desire to be well-regarded or misleading you about their true intentions.

Someone wearing a mask

Seeing someone wearing a mask in the dream realm is an allegory for your feelings towards others. You might perceive some people to be unreliable or dishonest because of certain circumstances in the real world. You could also be thinking that they are jealous of your accomplishments and they are approaching you for their gains. This will cause you to keep your distance from them, which might be good or bad, so it is important to assess the situation well.

Big masks in the attic

I was in the unfinished attic of a new house where I was staying or living and there were 3 huge white face masks facing me. They were about 4 feet long and about 10 feet away from me.

Exploring or being in an attic during a dream vision represents your attempts to improve yourself mentally, emotionally, or spiritually. The unfinished condition of the attic reflects the journey you are going on to be completed in order to achieve this enlightened state, either through studying, prayer, or meditation. The three white face masks, then, represent seeing some changes in your life and well-being, but perhaps not what you wanted or expected. Others may react negatively to your conversion of thought and behavior, possibly leaving you hurt and lonely.