Hello, my name is ZOLO, dreams about Calf are usually associated with dreaming about saving a drowning calf, do you think it is true?

I saw a calf standing on a platform across from me with other calves. It started to fall asleep and fell off of the platform. I immediately dove into the dark water and grabbed onto the calf. We sank immediately. Falling faster and faster. I had to choose to hold onto the calf and accept death which I was not afraid of, it was strangely comforting. I remembered my family and immediately saw tons of large beings standing in the waters reaching for me. I let go of the calf and began to swim up own.

Dreaming about calves signifies the arrival of good tidings in your life. It is a clear indication that things are going to turn in your favor. You would be in a position to help people and would provide that help willingly. This is further reinforced by the image of you rushing ahead to save the drowning calf. Saving anything or anyone from drowning is a sign of you being obliging towards those who may be in need of assistance. You would provide the necessary expertise to someone whose fortune might be dwindling. The fact that you were not afraid of drowning implies that you have full confidence in your abilities. The large beings are actually your own capabilities which help you overcome any fears and allow you to regain your confidence in yourself once again.

I dreamt of four calves, of which three had multiple heads and one was normal. All healthy, the normal and multiple-head one were sucking milk from the mother cow hoisted up on a high table. The other two multi-head calves were standing down and playing.

More commonly, a calf symbolizes wealth and prosperity in the dream world. However, a calf with multiple heads may be indicative of petty problems which could potentially become a major headache. Perhaps those multi-headed calves are the problems you must overcome in order to attain your goals. They may be slackers at your place of work or seemingly negligible concerns which could snowball into a crisis. While those individuals or issues may initially appear harmless, leaving them unchecked could eventually hurt your future success. Watch out for warning signs, whether they be at home or in the workplace, so you will not have to deal with a major problem down the line. 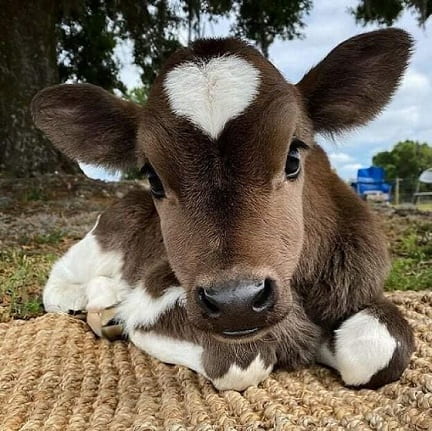 Saving a calf stuck in a pit

I am a Hindu girl. We consider cow as divine mother. I was walking and saw a calf stuck in a pit struggling to come out. I saw the calf's parents trying to help the calf out. As I was looking at them, I felt that my feet have touched the ox. I backed off feeling bad about that. But the ox stood up and was asking for my help to get the calf out of the pit. I was approaching the pit to help out.

This dream vision seems to reflect your religion and personal character rather than predict any future events. Seeing a calf is generally an auspicious symbol associated with good fortune and happiness. Noticing that the calf was stuck represents your commitment to maintaining good behavior both when times are plentiful and when you are experiencing hardships. Approaching the calf to help it at the end of the dream further shows your kind and generous nature. Even as your own circumstances improve, you never forget about those who could still be suffering.

I saw a cow giving birth to baby cows and each baby had red, green and silver bangles in their hands.

Seeing a cow give birth and observing the mother with the babies suggests all your current difficulties and struggles would eventually bring you prosperity and happiness. The different colored bangles represent different aspects of your changing personality as it happens, meaning red for passion, green for prosperity, and silver for happy relationships. You are likely to find great comfort and satisfaction in the future.

Being shot and saved by a calf

I was shot in the neck by a stranger and shot in my arm by my friend and a brown calf cured me.

When you dream about being shot, it could reveal there is someone in your waking life who is attempting to attack you, such as an adversary or a rival watching over your moves and activities to strike against you when the right time comes. It could be a way of your subconscious to force you to be on alert and suspicious of people who may have acted against you in the past, even though everything seems to be okay for now. However, it is good news that your dream ended with a calf healing you, because calves symbolize the arrival of good tidings. So even if someone is trying to hurt you, not only would they fail to succeed, but their plans could even backfire and actually improve your current situation.

Calves grazing in an abandoned city

Had a dream about black and white spotted calves grazing separately in what was like an abandoned city. Each calf was by itself grazing peacefully. There was a total of nine calves, but all were by themselves.

Black and white calves grazing peacefully in this dream are a sign of an upcoming opportunity to make more money or to get some bonus for extra services provided. This could be an unexpected assignment at work or perhaps tips from some type of service-related job. In either case, you should be careful about how far you push yourself to make a few extra bucks. The number nine indicates mental fatigue and stress brought on by extra work, and the abandoned state of the city suggests being left alone and helpless, so maybe you should put your health and sanity before monetary gains.

Giving a pet calf to be slaughtered

My pet calf was skinned alive by a guy using an electric meat cutter. I was the one who had to carry my pet calf to the guy to be skinned. There was no blood and I woke up crying.

To dream of a calf indicates the persistence of immaturity and innocence. The calf could be symbolic of your lack of experience or the need to grow up and face your responsibilities. Getting the calf skinned alludes to sensitivity. You may be feeling vulnerable and emotional at the moment. Perhaps this is your mind's way of making you realize the importance of being thick-skinned in certain situations. To overcome real-world challenges, you need to let go of or at least suppress your childish ways.